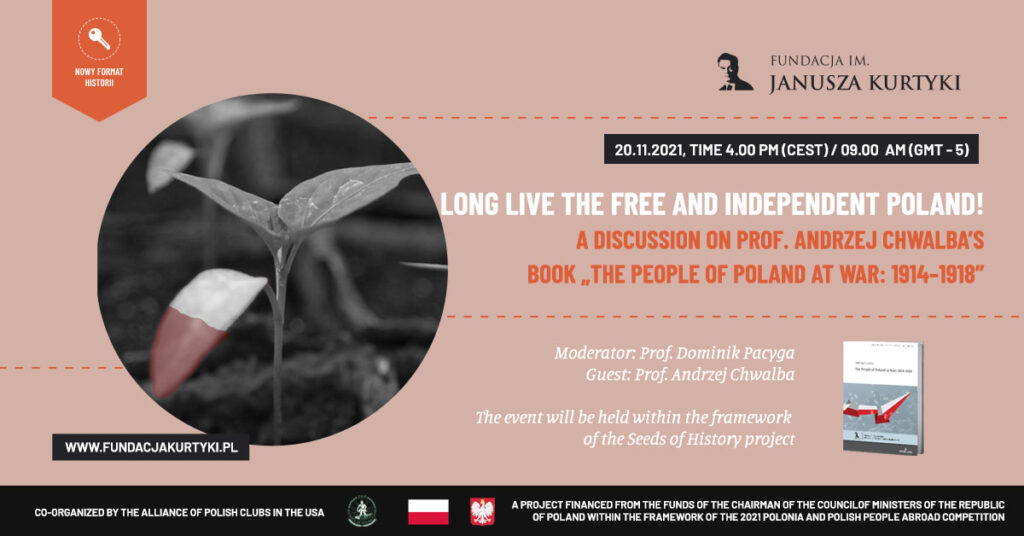 The Alliance of Polish Clubs in the USA and the Janusz Kurtyka Foundation present a meeting with Polish historian Professor Andrzej Chwalba, entitled „Long live the free and independent Poland! A discussion on Prof. Andrzej Chwalba’s book „The People of Poland at war 1914-1918”. The meeting will be held online on Zoom on November 20, 2021, at 9.00 am (GMT-5). The event will be held within the framework of „The Seeds of history” project.

1. Introduction by Dr. Łucja Mirowska Kopeć – President of Alliance of Polish Clubs in the USA

2. Presentation of the book by Mr. Paweł Kurtyka, President of the Board of the Janusz Kurtyka Foundation;

5. A questions and answers session.

Zoom Link to the meeting: https://bit.ly/3nU6IbG 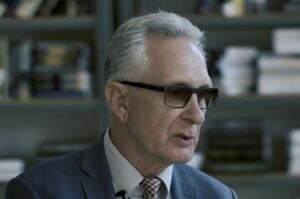 Professor Andrzej Chwalba is an eminent Polish historian and researcher of social, cultural, and political history. He is head of the Historical Anthropology Department at the Jagiellonian University, specializing in the social and anthropological history of World War I and World War II, Polish-Russian relations, and the history of Kraków. He is a member of the editorial staff of a number of scholarly journals and research boards such as the Council of the Museum of World War II and the Museum of Polish History. He has authored over 20 books, many of which have been published in foreign languages (Bulgarian, Croatian, Czech, English and German). Winner of the First Prize of the Oskar Halecki Historical Book of the Year Competition and of the Second Edition of the Competition for the Janusz Kurtyka Award for his book Wielka Wojna Polaków 1914-1918 (English edition: The People of Poland at War: 1914-1918). 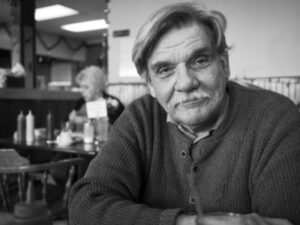 Dominic A. Pacyga has authored, or co-authored, seven books concerning Chicago’s history including Slaughterhouse: Chicago’s Union Stock Yard and the World It Made (2015), Chicago: A Biography (2009) and Polish Immigrants and Industrial Chicago (1991, 2001), Pacyga’s newest book, American Warsaw: The Rise, Fall, and Rebirth of Polish Chicago, was published by the University of Chicago Press in the fall of 2019. He was a member of the Humanities, History, and Social Sciences Department at Columbia College/Chicago from 1984 until his retirement in 2017.  Pacyga won the Oscar Halecki Award from the Polish American Historical Association for his book, Polish Immigrants and Industrial Chicago. In 2014 he was awarded the Miecislaus Haiman Award by the Polish American Historical Association for his contribution to Polonia Studies. In 2019 he again received the Halecki Award for American Warsaw. He also was awarded the similarly named Halecki Award from the Polish Institute of Arts and Sciences in American for American Warsaw.  Pacyga has appeared in both the Chicago area and national media. He has been a Visiting Professor at both the University of Chicago and the University of Illinois at Chicago. In 2005 he was a Visiting Fellow at Campion Hall, Oxford University. Pacyga was awarded a Fulbright Grant and taught in the Institute for American Studies and the Polish Diaspora at the Jagiellonian University in Kraków, Poland during the 2013-2014 academic year.

PoprzedniInternational aspects of the First World War and the battle for Lwów/L’viv, 1918
NastępnyThe Polish Understanding of Independence